I have a Razer Blade Pro 17 inch laptop and found a behavior that bugged me with no clear way to turn it off: Display auto-dimming. The laptop screen would get dimmer when I switched between applications and darkened to an unacceptable degree when loading VMWare Workstation (full screen). Others have had similar issues with their Razer laptops and had mixed results in finding a resolution.

The root cause is a power saving feature that is enabled out of the box in Intel HD/UHD integrated graphics. Looking online the recommendation is to use the Intel Graphics Control Panel to disable display power saving. This software was conspicuously absent from my system after pulling all the system drivers.

Ssearching around I found that I could download the Intel Graphics Control Panel from the Microsoft App Store. Intel provided guidance on this. Intel does not distribute the software outside of the microsoft store (at least that I can tell).

After installing the software, I navigated to the 'Power' setting and disabled panel power saving. This did the trick and auto-dimming stopped right away: 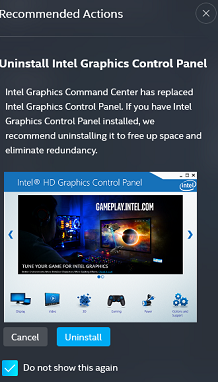 This 'command center' application was installed when I downloaded the drivers and has the same ability to change the display power savings mode. Online guides don't seem to have picked up on this fact yet, so I'll list what I did here for future reference:

And that's it. It does the same thing and if I'd adjusted the setting here I'd have been done already.